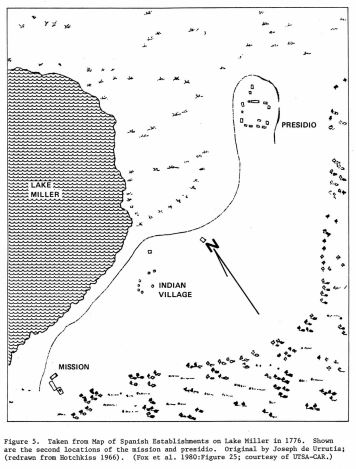 Nuestra Señora de la Luz Mission was established in 1756 on the east bank of the Trinity River near the site of present-day Wallisville in northern Chambers County. The mission and presidio complex attempted to prevent further French contact with the Orcoquiza and Bidai Indians and their neighbors. Two friars from the College of Nuestra Señora de Guadalupe de Zacatecas, Bruno Chavira and Marcos Satarain, presided over the mission, which was completed in 1757...In 1936 the state of Texas placed a marker on the west side of the Trinity River to denote the general location of the mission and presidio at El Orcoquisac. In 1965 and 1966, however, John V. Clay, supported by archeological excavations, established that the site was instead on the east bank of the Trinity, near Lake Miller. Almost no traces of the Spanish occupation remain.

Geolocation
29.5, -95.27
Historical Designation
National Register of Historic Places
Current Use
park
Current Condition
archaeological site
Chronology of Preservation Treatments
1756 built
1757
growth/modification
mission was moved closer to the presidio and rebuilt of timber
clay and moss
and roofed with palmetto
the mission and presidio suffered from lack of supplies
1766
a hurracaine swept through and severely damaged the mission
buildings were rebuilt and relocated as a result
1767
Marquez de Rubi and Nicolás de Lafora concluded that the mission and the presidio had little strategic importance
1771
El Orcoquisac was lft empty and its location was lost for many years afterward
1965
The site of Orcoquisac was rediscovered by John V. Clay in 1965 and was confirmed by later archaeological investigation
no extant structures
1972
added to the National Register Historical Places as part of an archaeological district
Jurisdiction/Ownership/Management
Wallisville Heritage Park
Principal Building Materials
timber
clay
moss
palmetto
Ancillary Features
presidio
village