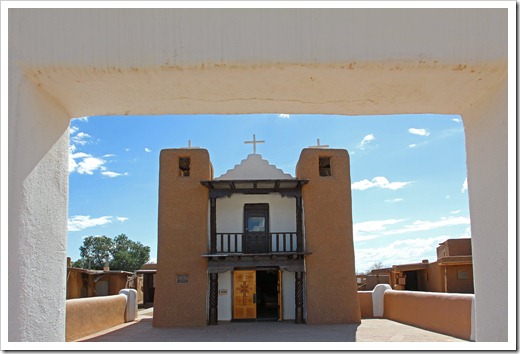 The adobe homes, ceremonial kivas, archeological remains, and the ruins of an original San Geronimo de Taos and its 1850 replacement reflect this coming together of American Indian and Spanish culture. Fray Francisco de Zamora came there in 1598 to establish a mission, and 1620, the first Catholic Church in the pueblo, San Geronimo de Taos, was constructed. Reports from the period indicate that the native people of Taos resisted the building of the church and the imposition of the Catholic religion. By 1660, the native people killed the resident priest and destroyed the church. Only several years after its rebuilding, the Pueblo Revolt of 1680 began and the Taos Indians again destroyed San Geronimo and killed two other priests. By the turn of the 18th century, San Geronimo de Taos was under construction for a third time, and another replacement was constructed in the American period in the 1850s. In 1992, the Taos Pueblo was designated a World Heritage Site by UNESCO.